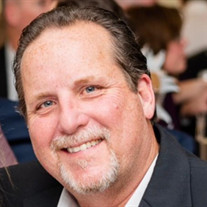 On Tuesday , January 21, 2020, Michael Patrick Hill, loving husband and father passed away at the age of 54 after a brief illness. Michael was a volunteer with the Osceola County Fire/Rescue retiring as a lieutenant and he also was a 28 year employee of Rotech Healthcare.

He is survived by his loving wife Michelle Gelinas Hill, Mother in Law Rebecca Silver, brothers Bill Hill, Tim Hill, Jim Hill and John Giambrone, his sisters Barbara Hill Foster and Debbie Hill Williams and her husband Kevin Williams. He is also survived by his stepsons, Jonathon and his partner Mark, Cameron and his wife Amanda, William and his wife Aubrey and Chandler. He also had 4 beautiful grandchildren, Rylee, Lucas, Jayden and Oliver and many adored nieces and nephews.

Want to get notified whenever we write about Osceola Memory Gardens Cemetery Funeral Homes & Crematory ?

Sign-up Next time we write about Osceola Memory Gardens Cemetery Funeral Homes & Crematory, we'll email you a link to the story. You may edit your settings or unsubscribe at any time.